Show All News
This Post is only available in German.

Spreadshirt Marketplaces will be further developed strategically and operationally under new management.

Spreadshirt Marketplaces is the brand that connects designers and customers around the world through unique products. Gunter Nickel, an experienced and fashion-savvy e-commerce manager will now be at its helm. The 44-year-old comes from the management team of the online fashion company Zalando, where he held various management positions in the board departments Strategy and Finance. With a degree in industrial engineering, he already looks back on a long consulting career at the international management consultancy A.T. Kearney, where he advised clients in various industries as an expert in growth and management issues. As an business consultant, he also acquired in-depth knowledge in the strategic support of young entrepreneurs in the Berlin startup environment.

“As Director of Spreadshirt Marketplaces, my goal is to accelerate the current growth of the business unit, and to establish the brand as a natural point of contact for buyer groups with a penchant for design. It is also important to me to reach new market segments beyond the gift buyer, such as fashion-savvy buyer groups. Our ambition must be to become the number one marketplace for creatives and to expand our product range in line with our target groups,” says Gunter Nickel, who brings over ten years of experience in market positioning and corporate strategy.

Previous CSR @ Spread Group: 5 Questions for Andrea Radziewsky
Next Up Mission to the Stars! Spreadshirt Launches a Star Academy for Designers

Looking for facts, figures, or photos?

Spread Group joined the non-profit association Charta der Vielfalt e.V. today. Now the values exercised at the group’s locations will be more visible and tangible from the outside. As a member of the nationwide initiative, Spread Group is committed to consistently driving forward diversity management and inclusion. In doing so, it can build on existing processes and internal projects that have already been initiated.

“We are proud to be a part of this important initiative now. More than 50 percent of our management positions are already held by female executives, and it goes without saying that every employee can work part-time for us – even in management. We will now continue to develop this open environment while respecting the charter’s standards. For example, we are planning new workshops to raise awareness for diversity topics and involve the ideas of our staff in the process,” says Theresa Kretzschmar, Global HR Director of Spread Group.

The Charta der Vielfalt e.V. association was founded in 2010 and began its work in March 2011 under the patronage of German Chancellor Dr. Angela Merkel. As a signatory, the Spread Group joins the circle of more than 3,800 companies and institutions. These are committed to advancing the recognition, appreciation, and inclusion of diversity by way of voluntary commitment.

Spread Group’s Polish production moves to a new location and expands its capacity and technical park.

Spread Group has opened a new production facility in Legnica, Poland. After 13 years in the north of the city, the company is moving into a state-of-the-art new hall in the Panattoni Park in the south of Legnica. With a total area of almost 11,000 m², the new building offers space for an enlarged warehouse, expanded machinery with different printing technologies, and more office space. 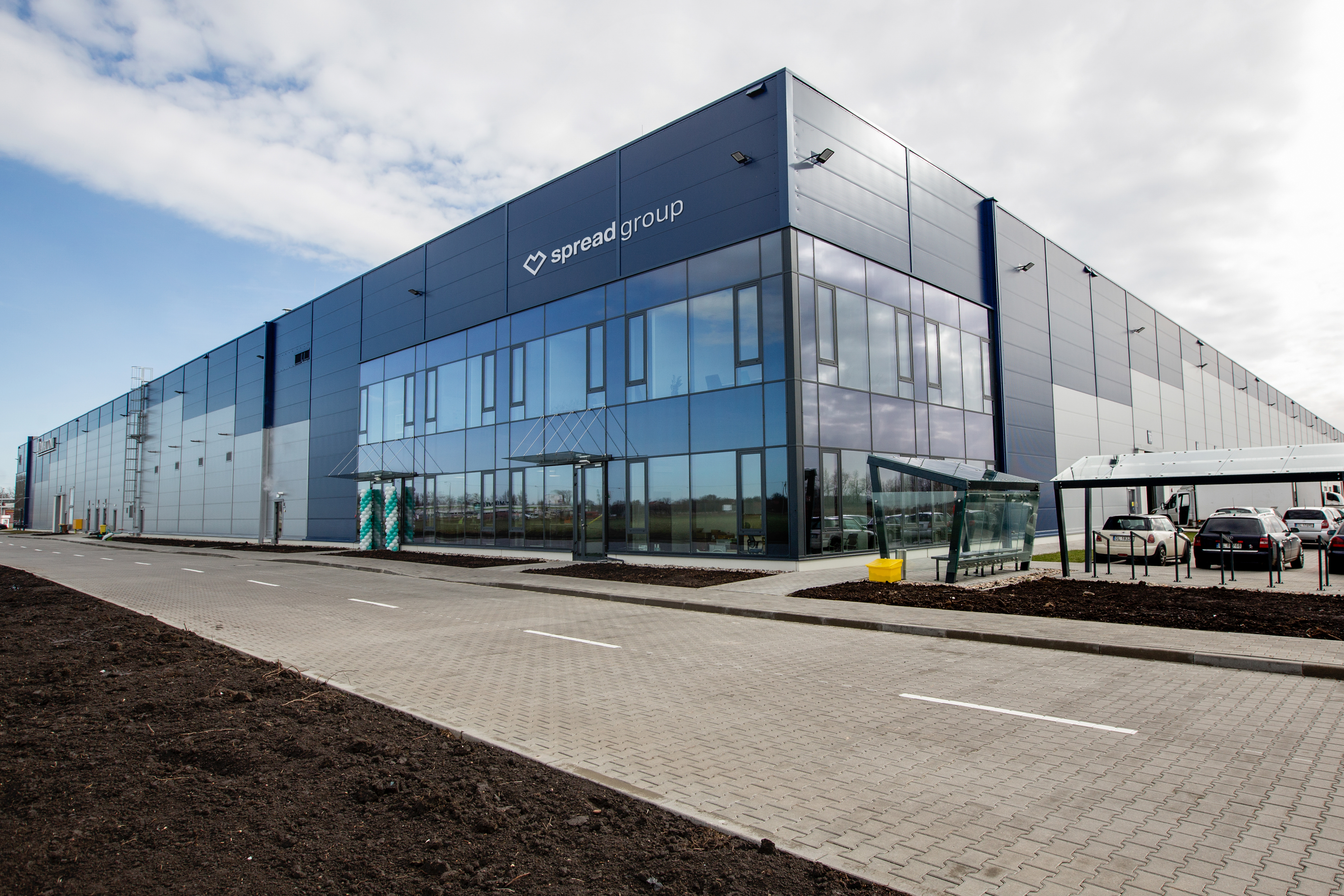 “The new location helps us optimize our European logistics. From now on, Legnica will serve as the central warehouse for our production in Germany, the Czech Republic, and Poland. We currently have around 4,500 storage locations for products. We are now able to double or even triple this capacity. The move was a real team effort! I am very proud of the entire team who, despite the circumstances over the last 12 months, got our new, strategically important production facility up and running on schedule,” says Hanne Dinkel, Spread Group’s Chief Customer Delivery Officer.

The investment and the move to the new building also underline Spread Group’s commitment to the region and the expansion of its printing technologies. In addition to machinery of refinement methods such as foil printing, thermal sublimation, poster and sticker printing, additional state-of-the-art digital-direct printers have been installed. Newly developed machines for printing on polyester products and machines for embroidering clothing will be moving into the site in the near future.

Logistical advantages in every respect

“The production hall and warehouse are now located on one level, which optimizes and simplifies the entire organization and production. In addition, our new location now boosts very good transport links to the highway, which will benefit our suppliers, logistics service providers, and our colleagues,” says Ewa Ziemba, Director Production in Legnica.

Currently, around 200 colleagues work in production in Legnica, some of whom have been working there for many years. With this move, Spread Group has been able to recruit new employees. The team is also looking for further reinforcements on site – from seasonal workers to new specialists.

The production facility in Legnica is one of five Spread Group production sites. In 2020, a total of 9.8 million products were printed at the various sites and shipped to customers worldwide. The print-on-demand provider plans to further increase the number of printed products in 2021. With the new facilities at the Legnica site, the company is ideally positioned to achieve this goal.

About the new production facility in Legnica:

The 2020 financial year was a record year for Europe’s leading print-on-demand provider. Spread Group continued its profitable growth course in the year of its coming of age – it was founded 18 years ago under the name Spreadshirt. The figures for 2020 show revenues of $195 million, representing growth of 33 percent on the previous year. A total of 9.8 million products were printed and shipped to customers in over 170 countries. With these annual results, outgoing CEO Philip Rooke hands over the baton to Dr. Julian de Grahl, who will take over management of the group on April 1.

“Nobody would have thought it possible to end the year with record sales and profits in the spring of 2020, when the corona virus pandemic overshadowed everything. Thanks to our great team and flexibility as an organization, we were able to adapt our business to the new circumstances. We introduced new products in a very short time and adapted our offer to the target groups and their demand. As a result, we were able to benefit greatly from last year’s e-commerce boom. We close 2020 as probably the healthiest company in our industry,” summarizes Philip Rooke, CEO of Spread Group.

The drivers of success were individual and gift orders at Spreadshirt Marketplaces, Spreadshop and SPOD. Spreadshirt Marketplaces alone achieved year-on-year revenue growth of over 65 percent. In addition to numerous licensed designs, such as “Harry Potter” designs relating to current social and political events, such as “Black Lives Matter,” were high in demand on the marketplaces. In addition, there was a sales boom in stickers after their platform-wide launch in the second half of the year.

In the Spreadshop division, the shops of social media influencers and activists such as “Reclaim your Power” or “1 Billion Rising” were particularly popular. Another driver has been Spreadshop’s integration with YouTube, which was concluded at the end of the year. It sets new standards in merchandising sales. Through Spreadshop’s integration with YouTube, creators can design their fan merchandise on the industry’s largest assortment (130+ products) and offer it directly under their videos and in their YouTube store tab.

Change at the top of the company

Dr. Julian de Grahl brings with him almost 20 years of experience in the internet industry and listed companies. He has been Managing Director at CTS EVENTIM since 2012, and was previously Managing Director at amiando (now XING Events) and Vice President Vertical Business at XING AG (now New Work SE). Dr. Julian de Grahl studied law and economics (business administration) in Hamburg and Cape Town and earned his doctorate at the University of Hamburg.

“Under Philip Rooke’s leadership, Spread Group has developed from a start-up to a highly profitable industry leader. I have great respect for this achievement. I am very excited to continue this growth trajectory together with a sensational team and to set new stimuli,” says the future Spread Group CEO Dr. Julian de Grahl.